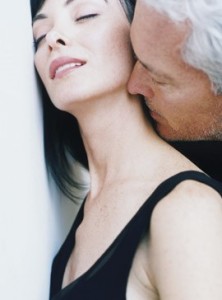 Marie K. From The Bay, was asked? What is Great about sex over 40?

1. I know how to ask for it. I have given up doing the “getting warmer” noises leading to specific instructions. Similarly, at this age you can be totally honest during sex, as in, “You are joking, I can’t bend over there,” or “Whoops”.

2. In general, I say what I’m thinking in the bedroom. For example, “Do we actually have to, I am so tired? Shall we make time tomorrow instead and do it without fail?”

If you were young and impressionable you might think that this was unromantic, but it’s actually fantastic. When people talk about honesty in the relationship, this is definitely what they mean.

3. I can laugh about it when I get cramp/get stuck etc. Obviously I always laughed about it… but now there no self-doubt lurking in the background, and the mild suspicion that he might be thinking, “Yikes, she’s a bit clumsy/heavy/unfit.”

4. After the age of 40 you are just more self-possessed. This gives you the aura of a woman with hidden depths rather than a callow girl who does not yet know who she really is – which, in turn, intrigues men and makes them work harder.

5. Women get increasingly open about sex – girlfriends who have never so much as mentioned it before will ask, “Have you tried this? You really should. But not on top speed.”

6. I don’t need to analyze it. When you’re over 40 you realise sex is sex and, quite often, it is just for sex’s sake and means absolutely nothing. Just as having a couple of nights off doesn’t mean he no longer loves you.

7. Chances are that he’s roughly your age, and that means he’s: a) More experienced; b) Genuinely likes women or he would be sleeping with a 28-year-old, and c) He’s taking life a little bit slower. All of which are good for sex.

9. I tend to go to bed a bit earlier so, sometimes, you can be having sex before midnight and be relatively sober. This is unheard of in your youth and throughout most of your thirties – and sex is definitely better without room spin.

10. You can be the selective-type after (40). Your options are broader. I think I’m more attractive than I was ten years ago. This may be to do with losing my insecurities, but it’s also about things that have come together in my life.